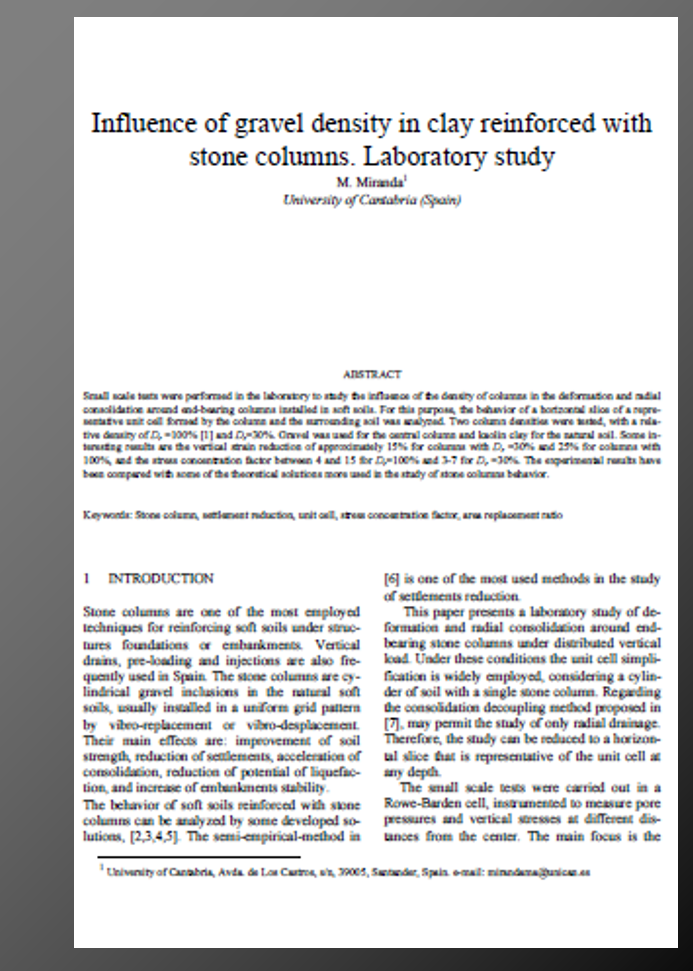 Resumen: The paper describes a procedure to perform backanalysis of tunnel excavation problems in an automatic manner. The measured displacements are compared with the calculated ones obtained from a Finite
Element Analysis, forming the objective function. The parameters that best represent the measured data are those that minimize the objective function and a suitable minimization algorithm is required.
In this paper a genetic algorithm and a gradient based method are described. The Finite Element code Plaxis has been used as a tool for the direct analysis.The parameters to identify are the coefficient of lateral earth pressure (K0) and the reference Young’s modulus for unloading and reloading (Eur ref), to the reference pressure (pref). The «Hardening soil model» from Plaxis has been the constitutive model selected to simulate the soil behavior. The geometry considered is a synthetic case involving the excavation of a circular tunnel. The paper shows the advantages and disadvantages of each optimization algorithm in the context of this tunnel excavation problem.

Resumen: Small scale tests were performed in the laboratory to study the influence of the density of columns in the deformation and radial consolidation around end-bearing columns installed in soft soils. For this purpose, the behavior of a horizontal slice of a representative unit cell formed by the column and the surrounding soil was analyzed. Two column densities were tested, with a relative density of Dr =100% [1] and Dr=30%. Gravel was used for the central column and kaolin clay for the natural soil. Some interesting results are the vertical strain reduction of approximately 15% for columns with Dr =30% and 25% for columns with 100%, and the stress concentration factor between 4 and 15 for Dr=100% and 3-7 for Dr =30%. The experimental results have been compared with some of the theoretical solutions more used in the study of stone columns behavior.

This website uses cookies to improve your experience while you navigate through the website. Out of these, the cookies that are categorized as necessary are stored on your browser as they are essential for the working of basic functionalities of the website. We also use third-party cookies that help us analyze and understand how you use this website. These cookies will be stored in your browser only with your consent. You also have the option to opt-out of these cookies. But opting out of some of these cookies may affect your browsing experience.
Necessary Siempre activado
Necessary cookies are absolutely essential for the website to function properly. This category only includes cookies that ensures basic functionalities and security features of the website. These cookies do not store any personal information.
Non-necessary
Any cookies that may not be particularly necessary for the website to function and is used specifically to collect user personal data via analytics, ads, other embedded contents are termed as non-necessary cookies. It is mandatory to procure user consent prior to running these cookies on your website.
GUARDAR Y ACEPTAR