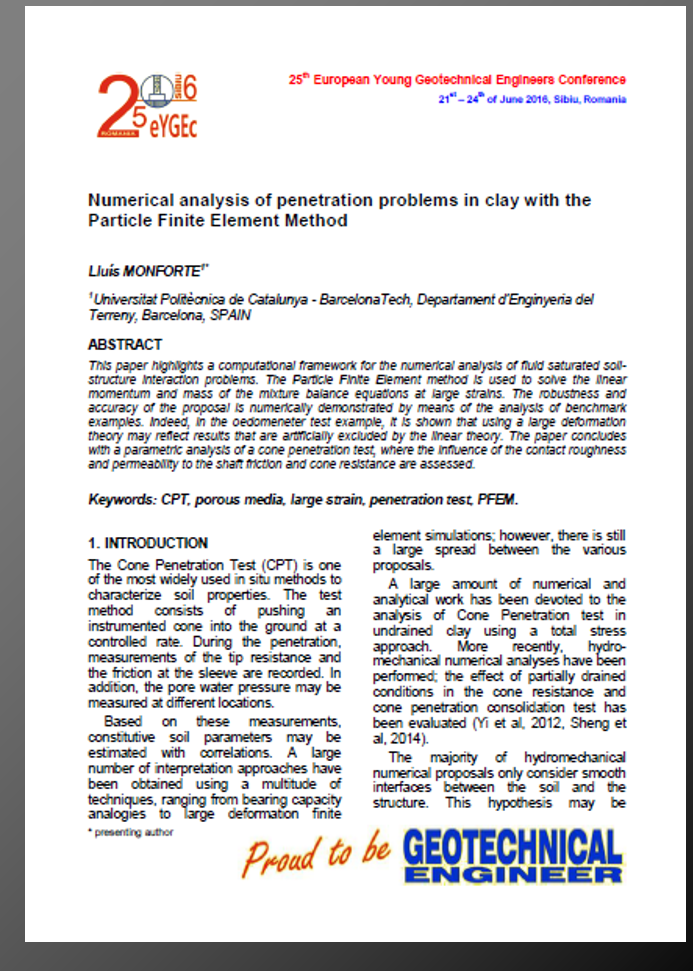 1.- «Numerical analysis of penetration problems in clay with the Particle Finite Element Method»

Resumen: This paper highlights a computational framework for the numerical analysis of fluid saturated soil-structure interaction problems. The Particle Finite Element method is used to solve the linear momentum and mass of the mixture balance equations at large strains. The robustness and accuracy of the proposal is numerically demonstrated by means of the analysis of benchmark examples. Indeed, in the oedomeneter test example, it is shown that using a large deformation theory may reflect results that are artificially excluded by the linear theory. The paper concludes with a parametric analysis of a cone penetration test, where the influence of the contact roughness and permeability to the shaft friction and cone resistance are assessed.

This website uses cookies to improve your experience while you navigate through the website. Out of these, the cookies that are categorized as necessary are stored on your browser as they are essential for the working of basic functionalities of the website. We also use third-party cookies that help us analyze and understand how you use this website. These cookies will be stored in your browser only with your consent. You also have the option to opt-out of these cookies. But opting out of some of these cookies may affect your browsing experience.
Necessary Siempre activado
Necessary cookies are absolutely essential for the website to function properly. This category only includes cookies that ensures basic functionalities and security features of the website. These cookies do not store any personal information.
Non-necessary
Any cookies that may not be particularly necessary for the website to function and is used specifically to collect user personal data via analytics, ads, other embedded contents are termed as non-necessary cookies. It is mandatory to procure user consent prior to running these cookies on your website.
GUARDAR Y ACEPTAR