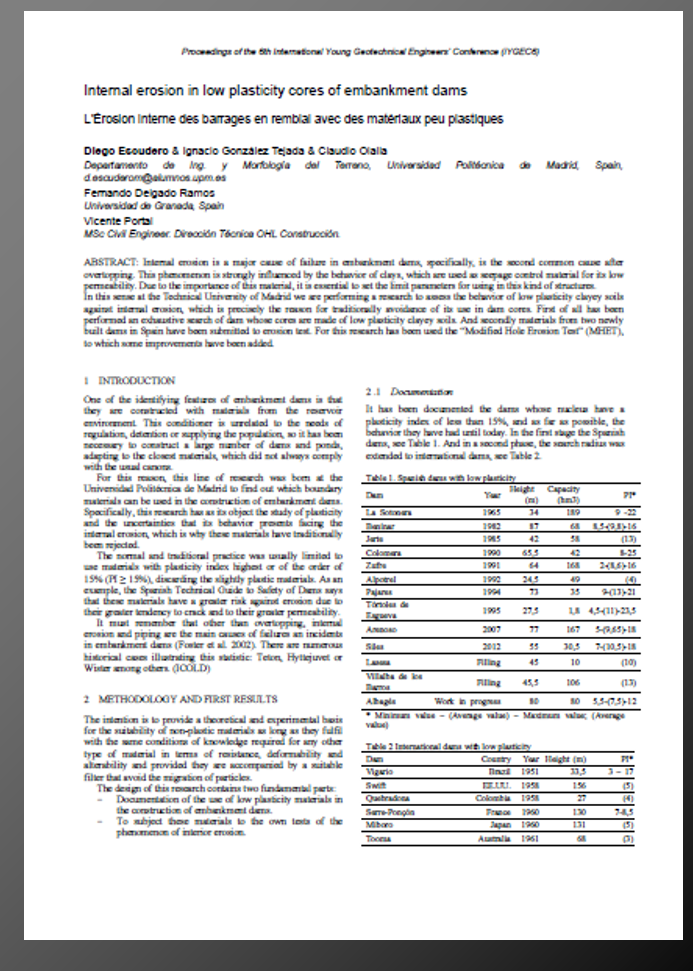 Resumen: Internal erosion is a major cause of failure in embankment dams, specifically, is the second common cause after overtopping. This phenomenon is strongly influenced by the behavior of clays, which are used as seepage control material for its low permeability. Due to the importance of this material, it is essential to set the limit parameters for using in this kind of structures.
In this sense at the Technical University of Madrid we are performing a research to assess the behavior of low plasticity clayey soils against internal erosion, which is precisely the reason for traditionally avoidance of its use in dam cores. First of all has been performed an exhaustive search of dam whose cores are made of low plasticity clayey soils. And secondly materials from two newly built dams in Spain have been submitted to erosion test. For this research has been used the “Modified Hole Erosion Test” (MHET), to which some improvements have been added.

Resumen: Internal erosion is the process in which water seepage causes the migration of the finest fraction of a soil. Piping erosion happens when a continuous pipe appears in the soil. As the water flows, the pipe evolves when the shear stress on its boundaries is enough to make some aggregates to be detached from the soil matrix. Understanding the factors that control this localized migration of particles is essential in predicting the contingency of internal erosion of embankments. The Hole Erosion Test (HET) is used to study piping erosion of soils with a clay matrix in the laboratory. This experimental device gives the eroded mass versus time under given hydraulic gradient conditions. With a numerical micro-hydromechanical method we investigate, in conditions similar to those of the HET, the role played by the micromechanical features of the soil in the erosion process. In particular, we pay attention to how the structure of a cohesive granular material determines its erosion resistance, represented by the critical shear stress. The numerical method is based on a coupling between the discrete element and the Lattice Boltzmann methods.

This website uses cookies to improve your experience while you navigate through the website. Out of these, the cookies that are categorized as necessary are stored on your browser as they are essential for the working of basic functionalities of the website. We also use third-party cookies that help us analyze and understand how you use this website. These cookies will be stored in your browser only with your consent. You also have the option to opt-out of these cookies. But opting out of some of these cookies may affect your browsing experience.
Necessary Siempre activado

Any cookies that may not be particularly necessary for the website to function and is used specifically to collect user personal data via analytics, ads, other embedded contents are termed as non-necessary cookies. It is mandatory to procure user consent prior to running these cookies on your website.